The morning continued pretty much in the same fashion as the evening had ended: one new Garnett’s and one new Zanzibar galago plus two re-trappings of one of each. The new record for trapped animals in one night is now 10! Not to mention the trapped mouse! Our camera trap, which is aptly positioned by the "Golden Trap2, also showed interest in the trap by a gecko and a mouse. An interesting note from the camera trap is that the Garnett’s galago went straight for the half coconut shell with pombe (palm wine) before anything else, before even getting in. A very clever animal!
After another balmy (…) day it was time for the last evening of trapping. We decided to get up one more time during the night for trap checking since we’ve been so successful the other night. It might be so that we can catch even more if we empty the traps yet another time. The first tour of the traps was not indicating a new record though. Nothing caught, well, no primates at least. A Tomahawk trap that we placed on the ground was visited by a Four-toed Elephant Shrew. We did no more than take some pictures of it and then released it. Hope the 1 o’clock morning check has more than this to show for it!
Upplagd av Johan Karlsson kl. 15:36 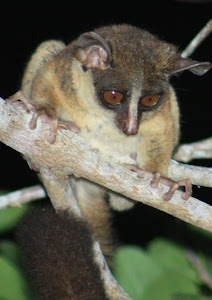